In 1947, twenty-six Greek immigrants gathered for the purpose of establishing an Orthodox Church in Rochester. They began the process of organizing the Greek community to move forward towards securing a state charter. The Archdiocese assigned the first spiritual leader in 1948. The first Divine Liturgy was celebrated in the American-Hellenic Educational Progressive Association (AHEPA) Hall in downtown Rochester. The Sunday School, a Greek school, and the Choir were also established. 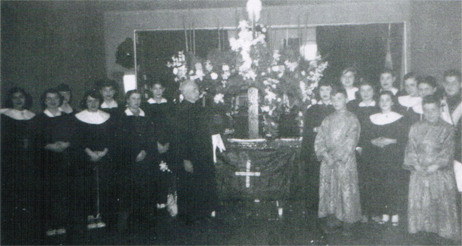 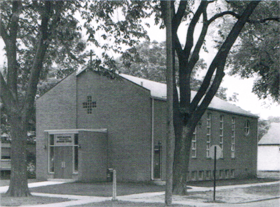 The community grew. In 1951, surrounding Rochester communities in southern Minnesota and western Wisconsin became part of the parish. With financial aid by the Order of AHEPA the parish began its dream of constructing a House of Worship - completed in 1954.

After 50 years at the original site and several remodeling projects. The community embarked on a building project. In 2002, the General Assembly approved the construction of our new church. The first Divine Liturgy was celebrated by His Eminence Metropolitan Iakovos of Chicago in October 2004.

His Eminence Bishop Ezekiel of Chicago celebrated the first Divine Liturgy and laying of the cornerstone in 1954. His Eminence Archbishop Michael urged the community to name the church Holy Anargyroi in honor of Sts. Kosmas and Damianos, the Doctors who were also miracle workers providing their services to the sick and infirm without pay. The name ties in with Rochester's fame as a medical city being home to the world renowned Mayo Clinic.

We are moving forward still, with ongoing capital campaign projects.