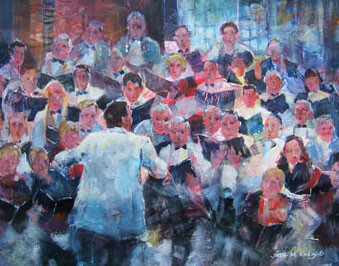 The Judeo-Christian tradition of worshiping and praising God with music is entirely rooted in monophonic chant; that is, melodies sung without additional instrumentation or even acapella polyphony. In Jewish liturgical chant, and also in the early Christian Church, melodies were sung in unison by the entire congregation.

With the establishment of Christianity and Constantinople as the new capital of the Roman Empire (aka. the Byzantine Empire), the early Christian Church grew up in a primarily Greek-speaking world from 330 A.D. until its fall in 1453 A.D. This transformation also included the Jewish vocal chant traditions.

Byzantine Chant is the sacred chant of the early Christian Church, and is undeniably of composite origin, drawing on the artistic and technical productions of the Greek classical age, on Jewish liturgical chant, and inspired by the monophonic vocal music that evolved in the early Christian cities of Alexandria, Antioch, and Ephesus.

In the Orthodox Church today, the majority of Churches continue to use Byzantine Chant as their primary musical tradition, including the Churches of Constantinople, Alexandria, Antioch, Jerusalem, Serbia, Romania, Bulgaria, Cyprus, Greece, and Albania. 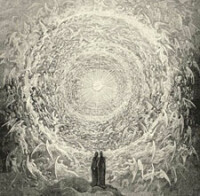 One music concept that must be understood is that the early Church believed in the angelic transmission of sacred chant; that is, that vocal chant united the prayers of the faithful to the prayers of the angelic choirs. This notion is present in the Apocalypse account (Revelation 4:8-11), and before this in the Old Testament of Isaiah (6:1-4), Ezekiel (3:12), and in Exodus 25. Early Church Fathers such as Clement of Rome, Justin, Ignatius of Antioch, Athenagoras of Athens, and Dionysius the Areopagite also supported this notion.

The effect that this concept had on church music was threefold:

That being said, all of these hymns have been passed down through the generations and are still in use by the Orthodox Church today. 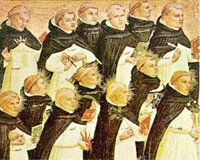 Gregorian chant is the tradition of the Church of Rome. Gregorian Chant grew out of Byzantine Chant, and is also a form of monophonic, unaccompanied sacred song. It developed mainly in western and central Europe during the 9th and 10th centuries. 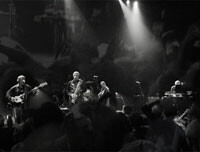 The electric guitar was invented in 1931-1932, and the drum 'kit' was invented in the early 1900's as well, therefore, rock bands or worship bands are a complete invention of the 20th century. Entertaining and uplifting as they are, they represent a musical tradition that is completely devoid of any theological, liturgical, or musical connection to the rich history of the Judeo-Christian liturgical music tradition.