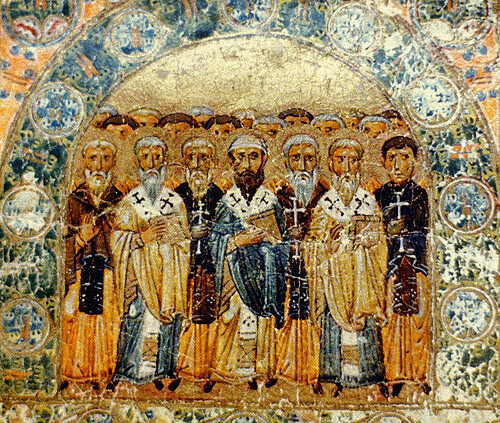 The Church Fathers are the most influential theologians and writers of the Orthodox Church, particularly those of the first five centuries after Christ. The term is not meant to include the New Testament authors.

Who are the Church Fathers?

Apostolic Fathers
Are the very earliest Fathers, from the first two generations after the Apostles.

Desert Fathers
Are early monastics living in the Egyptian desert; and although they did not write much, their influence was great. Among them are SS. Anthony the Great and Pachomius the Great.

Greek Fathers
Are those who wrote in Greek. They include Clement of Alexandria, Origen, St. Athanasius of Alexandria, St. John Chrysostom, Ss. Basil the Great, Gregory the Theologian, Gregory of Nyssa, and many more.

Latin Fathers
Are those who wrote in Latin. They include Tertullian, St. Augustine of Hippo, St. Ambrose of Milan, and St. Jerome, the translator of the Vulgate.

The Roman Catholic Church regards St. John of Damascus in the 8th century to be the last of the Church Fathers, but the Orthodox Church has never considered the age of Church Fathers to be over, and it includes many later influential writers as well.